“From Rooftop to Top Heights”

Inspired by Hermès' main theme of the year "The Human Odyssee" we've created a series of windows. The story is based on the statue of the iconic rider, standing on the rooftop of the Hermès flaship store in Paris.

On the corner of the roof from the Hermès Rue du Faubourg store in Paris, stands a horse with a rider on top. He has been looking out over the city for decades. Despite having one of the best views of the city, he longs to discover the world.

Like the rider and his horse, we often look at the same spot from the same window. Travel everyday the same road, meet the same people and go trough the same patterns every day. It is a human ability to urge for adventure, to fantasize about new possibilities.
But in the end there is always the will to return back, back to your loved ones, back to the place you know best. This story is an ode to everyone who dares to leave the beaten track. And an invitation to everyone who secretly want to. 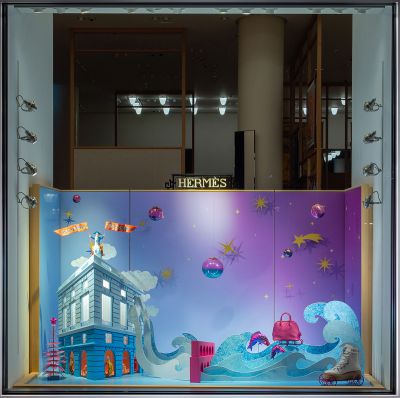