For De Bijenkorf, we realized a large campaign in honor of Saint Nicholas. This campaign was presented nationwide, both in the form of a commercial on national television and as a large visual campaign displayed on billboards throughout the country. We made a very detailed scale replica of De Bijenkorf. Every nook and cranny was replicated in as much detail as possible and the whole was then painted in a deep blue nighttime color. With a crew of 15 actors we brought the building to life and then mounted the fictive characters behind the windows of the classical Bijenkorf building. 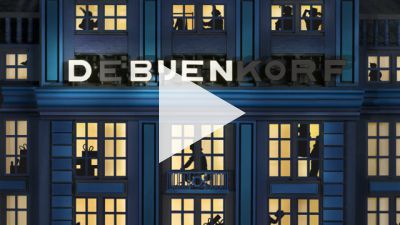